350.org and Alliance for a Just Rebuilding mobilizing for October 27 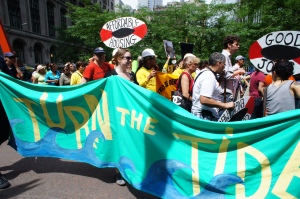 350.org, an activist NGO dedicated to slowing global climate change, has joined Alliance for a Just Rebuilding,  Faith in New York and other community-based groups in Sandy-hit areas. In a message sent out to 350.org members, the group called for a “just rebuilding” that includes:

First, good jobs for New Yorkers. Right now a majority of cleanup jobs are going to out of state, low wage workers that aren’t helping rebuild the economy.

Second, affordable housing. Storm-impacted communities need housing that they can afford — even beyond what was there before the storm — not more condos.

Third, renewable energy. Sandy was a climate change-fueled storm, and rebuilding must be powered by the sun, wind and water, not fossil fuels.

Fourth, health care. The places most vulnerable to big storms in New York are losing hospitals and other health facilities; rebuilding money should keep health care in the communities that need it.

Fifth, community consultation. The City of New York is not listening to the people who were hurt worst by the storm. This is an obvious and necessary first step to a just rebuilding.

350.org and Alliance for a Just Rebuilding are organizing a march on City Hall for October 27th as part of the continuing “Turn the Tide” Campaign:

The action will be led by Sandy Sojourners who are marching to City Hall from all 5 boroughs on behalf of communities who felt the worst impacts of the storm. Folks will be walking all the way from the Rockaways, the shoreline communities of Staten Island, and the parts of Brooklyn and the Bronx that are most vulnerable to storms like Sandy. A crowd of hundreds will meet them at the end of they journey at City Hall, where together we’ll stand for the kind of rebuilding that New York City deserves: one powered by renewable energy, that creates good jobs by building affordable housing and strong health care — all in real consultation with communities on the front lines of the climate crisis. 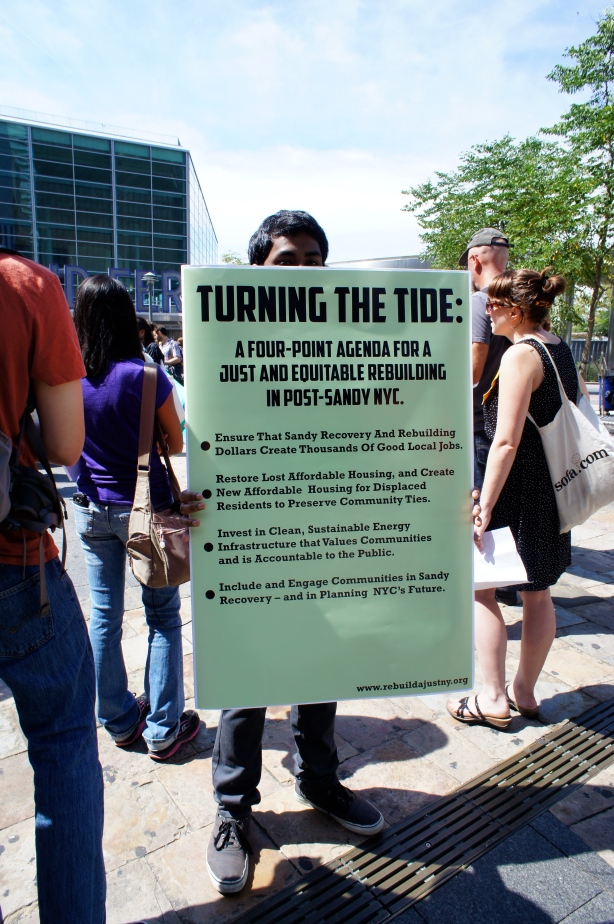 Placard outlining a just rebuilding in NYC as part of an earlier demonstration in the Turn the Tide campaign. Photograph by Max Liboiron.

From: News
← Community Voices on the Recovery: Sandy and the Election, Part 2
Job posting: Social Scientist, NOAA Office of Program Planning and Integration →