The cost of risk: why taxpayers foot the bill for flood insurance 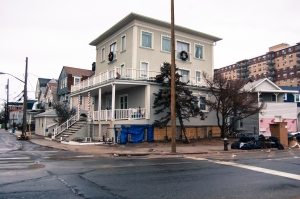 There’s only one provider of flood insurance in the United States: the government-run National Flood Insurance Program (NFIP). This is because private insurance companies won’t offer flood insurance – they can’t provide a product at a price people are willing to pay while also meeting their own standards for profitability. Therefore, in 1968, the NFIP was established. Its overall goal was to reduce the amount of money paid out through federal disaster assistance, by introducing a market mechanism which would help people better appreciate the financial risk of living in flood-prone areas and recoup some of the expenses of disaster relief.

The idea was this: people expect the federal government to provide financial assistance to communities when they are hit by disasters. (See, for example, the backlash when FEMA told Texas that the state should provide assistance in the wake of a fertilizer plant explosion, and the problems that arose when a disaster occurred during the federal shutdown.) But if the government always steps up, it makes it easier for people to live in high-risk places, areas that are subject to floods or fires. There is one tool that helps people understand the financial implications of risk: insurance. Risky behavior means more expensive insurance. Likewise, living in a high-flood-risk area should result in more expensive flood insurance, which will make people less enthusiastic about developing (and living in) high-risk areas. But this only works if (1) the insurance is available and (2) people buy it.

Enter the NFIP, which was founded in 1968. The NFIP constructs flood maps, updated periodically, to establish where people are likely to suffer flooding. These maps look at what’s known as the “100 year flood zone” – which many people assume means subject to periodic flooding once a century. But the 100 year flood zone is actually a way of describing the probability of flooding: it’s the zone in which buildings have a 1% chance of being flooded in a given year. And because floods are unpredictable, an area with a 1% chance of flooding may be flooded several times in a century. These probabilities are also changing, because climate change is changing the severity of storms – overall, scientists tell us that rain and storms will become more intense. Because of the changing weather, FEMA’s flood zone definitions have been changed to add a new “V” zone, where the possibility of flooding is compounded by closeness to a body of water.

If you get a mortgage in a flood-prone area, you are required to buy flood insurance, so that if your home is destroyed by a flood the bank gets its money back. This forces people to buy insurance when they buy their house – that is, the idea is to make homebuyers more aware of risk, as well as spreading the risk pool among a larger number of insured people. People who buy their house outright, inherit their house, or have paid off their mortgage aren’t required to buy NFIP insurance. Historically, there have also been many ways to obtain low rates, subsidized by the government. Of the 5.6 million policyholders, approximately 20% pay subsidized rates.

Until 2005, the NFIP covered its own expenses. However, once Hurricane Katrina hit, the situation changed dramatically. In the immediate aftermath of Hurricane Sandy, the program was already estimated to be $24 million in debt. After seven years of post-Katrina wrangling, a new law emerged which aimed to reform the NFIP. Passed in July 2012 – only a few months before Sandy – the Biggert-Waters bill targeted a number of problems with the program which academics and policymakers blamed for the program’s debt.

Many people with NFIP policies were getting subsidized premiums, because they had acquired their house before the first FIRM came out for their area. But these subsidies had been in place for decades. The FIRMs also didn’t take climate change into account – they weren’t required to use the best science available. So the Biggert-Waters Act phased out the subsidies and set stricter scientific guidelines for the FIRMs. It also denied insurance coverage to people who filed repeated claims.

All of these things make a lot of sense from a long-term perspective, particularly in the context of climate change. It’s estimated that sea level near New York City has risen a foot in the last century. That’s just the result of thermal expansion – as the ocean gets warmer, it gets bigger. And the ocean has been absorbing a lot of excess heat due to global warming. This doesn’t  include any melting ice sheets. It’s going to be hard for people to continue living in all the same places as they did before, and it will be hard for the government to keep paying out disaster relief as coastal areas face more and more flooding. (This situation is much much worse in places like Bangladesh and Southeast Asia.) Especially when the federal government’s debt is such a hot political topic, it’s hard to justify a government-run flood insurance program which is currently operating at a dramatic loss – particularly when these losses are growing. The original idea behind the NFIP was to save the government money, by reducing the overall payments that FEMA had to issue after disasters. The goal was to help people understand the risks of living in a flood zone, and to offer them the tools to help themselves without relying on direct government relief.

The next blog post in this series will discuss some ways in which the NFIP has failed to help homeowners, and why people are so angry about the Biggert-Waters bill.

From: Blog
← One Year On
Unfinished Work: Views of Superstorm Sandy from the Ground Up 1/16/14 →
2 Comments