Tenants: An overlooked vulnerable population in disaster research and recovery 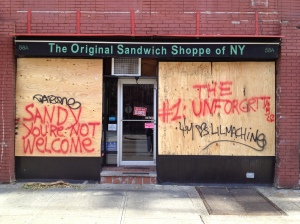 Hurricane Sandy destroyed or damaged 305,000 housing units in New York City.[i] Local officials were tasked with finding temporary housing for nearly 40,000 residents, a formidable undertaking in an area with miniscule vacancy rates and soaring rents. While widespread housing damage from a disaster has happened before in the United States—most notably the Loma Prieta earthquake (1989), Hurricane Andrew (1992), The Mississippi River Flood (1993), the Northridge Earthquake (1994), Hurricane Floyd (1999), and Hurricane Katrina (2007)—never has a disaster affected an area so heavily occupied by renters.  Almost 70 percent of New Yorkers – double the national average – rent their homes. Yet, they are an often overlooked vulnerable population in disaster response and research.  How has this population fared in Sandy’s tumultuous aftermath?  And what can we learn from the experiences of renters affected by Hurricane Katrina that can help tenants in New York City recover?

It was over seven years ago that Katrina slammed into the Gulf Coast leaving behind a path of destruction that made it the costliest disaster in U.S. history.  In the time since, many lessons have been learned, including the unique problems faced by renters after a disaster.  Many renters in New Orleans discovered that they had few legal rights.  Some were told that they had to keep paying rent on their damaged units if they wanted to stay put.[ii]  Others reported that landlords told them their apartments were uninhabitable, only to discover that their units had been remodeled to be leased out again for a higher price.[iii]  In the case of public housing residents in New Orleans, many of their buildings were demolished in order to make way for high-priced and mixed-income rentals.[iv]  For the most part, renters were not able to choose whether to repair or rebuild their homes, instead finding themselves at the mercy of their landlords.  And because of the limited reconstruction of affordable rental options, renters who wanted to return to New Orleans after the storm had to find themselves new housing in a tighter market and with higher rents.  The lack of available and affordable rental dwellings in metropolitan-area New Orleans cost many residents not only their physical homes, but even the chance to return to their original neighborhoods and communities.

Renters’ difficulties result not just from market forces, but the confusing legal framework as well.  For some renters, it is unclear whether they are responsible for continuing to pay rent if their unit was structurally damaged or if they have been without heat, hot water or electricity for an extended period of time. What if they want to move? Can they expect their deposit to be returned? Are they legally allowed to break their lease without financial repercussions?  To further complicate matters of disaster recovery, renters are unlikely to have any kind of insurance, including renters and flood insurance. While insurance companies argue that renters’ insurance is reasonably priced (around $100 per month) only 34 percent of renters have it.[v]  Also, regular renter policies do not cover flood damage.  For that, renters have to get separate insurance only offered through FEMA’s National Flood Insurance Program. Landlords may have insurance that covers the building structure but without renters’ insurance and flood insurance, many tenants affected by Sandy’s floodwaters are likely to encounter significant obstacles recouping funds for damaged belongings.

Lastly, it is important to consider that not all tenants have formal written agreements with their landlords.  Some may have leases in their names but others may have leases in someone else’s name or simply have a handshake agreement with their landlord.  Such variation, common in a city like New York, causes tremendous difficulty when requesting money from FEMA.  If there is no paper trail the local and federal governments are unlikely to provide financial relief.  Advocacy groups, policy makers, and government officials must attempt to account for such variation in future disasters so that all affected tenants are given the opportunity to recover.

To a frightening extent, renters in New York are facing the same grim circumstances as they did in New Orleans.  That’s bad not just for New York City, but for the country as a whole, since in general the percentage of tenants is growing.  The latest Census figures show that 35.4 percent of Americans are renters, which is up from 34.1 percent in 2004.  In large metropolitan areas like New York City (69 percent), Los Angeles (61.8 percent), Chicago (55.1), and Houston (54.6 percent) renters far outweigh homeowners.  As the share of renters across the country grows and the severity and frequency of extreme weather increases, now is the time to buck the trend when it comes to renters and disaster recovery.  Hurricane Sandy provides the next opportunity to give tenants a prominent voice in disaster recovery and prepare for the unique experiences of tenants post-disaster.  It’s not too late to achieve a different outcome—important work is being done by non-profit groups like Make the Road who are tracking the problems faced by tenants, including displacement, cost of home repairs, changes in rent, and health status post-Sandy.  SRL calls for further research and response like this to take this group into account in both disaster relief, in community resilience work, and when “building back better.”

Alexis Merdjanoff is a Ph.D. candidate in Sociology at Rutgers University, with research interests in social disruption, housing, health, and inequality.