New report on the roles of activists and community-based organizations after disasters. 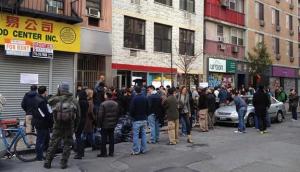 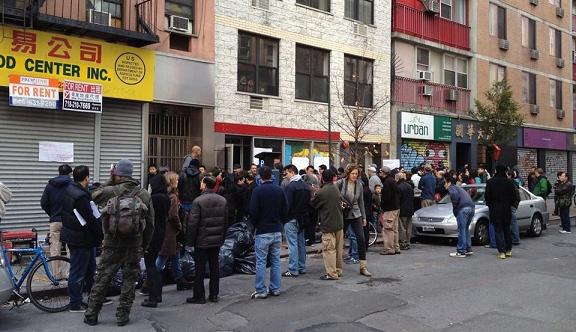 “Sandy brought out the best in people, and the worst in systems.”

Research and experiences shows that people run towards, not away from, disaster. The very first responders to an event-based crisis are always disaster survivors, followed by locals. Then, at some point, the official response, NGOs, and other disaster experts arrive. These later groups are also the first to leave while community and activist groups remain for long term recovery. The North Star Fund has released, “From the Edge of Disaster: How Activists and Insiders Can Use the Lessons of Hurricane Sandy to Make the City Safer,” a research and recommendation report drawing on 30 interviews with community-based organizations (CBOs) and participation in dozens of meetings and conferences across the city over the past two years. It is a preliminary report; a longer and more detailed version is forthcoming.

“It was a no-brainer, these are our community members, we had to do something. We had long-time relationships, people knew to come here, to send supplies to us. Some police were trying to shut down our relief work, but other police were referring people to us. The Red Cross didn’t come in for a week. Across the board, we were disappointed with every single level of the social infrastructure response.”
— Helena Wong, Executive Director of CAAAV

Post-Sandy reports, whether authored by government agencies, community-groups, activists or survivors, agree that activists and community-based organizations were the main sources of aid after Sandy. “From the Edge of Disaster” argues that,

“many of the capacities and skills that make CBOs effective advocates and organizers [include:] the deep relationships and mutual trust they have
built within the communities where they work; their local geographic knowledge of institutions and the makeup of their communities; their experience with door knocking; their commitment to letting the people affected define the problem; the flexibility, creativity, and resourcefulness which has always allowed them to do much with few resources; their ability to reach out to allies across the city; and perhaps most importantly, their deeply felt sense that people who live in these communities are not victims per se. Rather they are people who can take constructive action for themselves and their neighbors, once they have the necessary information and connections…. They saw that the disaster affecting the most vulnerable communities after the storm is strongly tied to the more protracted disaster that is the economic inequity and inequality within New York City.”

Such statements resonate with what we have found at Superstorm Research Lab (A Tale of Two Sandys): the notion that the most pressing disaster is the long-term, unequal division of wealth and resources, while Sandy was a punctuation mark that made such disparities more apparent. This definition of crisis results in fundamentally different notions of aid and action compared to the official response, which understands the crisis as a short-term weather event. This definition also argues that “‘recovery’ measures should not replicate the circumstances that made so many New Yorkers
so vulnerable in the first place.” Many of the report’s recommendations for rebuilding are based on the idea that resiliency, or the ability to bounce back after extreme weather crises, are skills developed at the local social level, the domain of CBOs. Yet, the support of government and philanthropy is essential due to the balance of resources in these institutions. Thus, recommendations are about proposing and strengthening partnerships between community groups, government, and philanthropy with the goal of enabling CBOs to take a lead in local expertise.

Summary of Recommendations from From the Edge of Disaster: How Activists and Insiders Can Use the Lessons of Hurricane Sandy to Make the City Safer

Recommendations for immediate relief work:
1. Map every community
The report calls for a tangible, common map that lists the “relevant assets and capacities in an emergency.” Versions of such maps listed include New York Disaster Interfaith Services map of faith communities, the Red Cross mapping project, and the Pratt Institute maps that show levels of social vulnerability in impacted areas. SRL also found that the NYC Department of Sanitation had excellent maps and local knowledge at the capillary level of streets, alleys, and households.

2. Designate gathering spaces
Consistently, research finds that centralized locations where information and gathering can take place are not only essential to disaster relief, but occur as a matter of course. These tend to be churches, libraries, or community organizations that are already known and trusted as public space before crisis. From the Edge of Disaster argues that these should be designated ahead of time.

4. Plan for access to technology
During Sandy, power, cell phone service, and even landlines went down. Yet, Twitter, FB, phone hubs, and other networked technologies central to relief.

5. Support local relief organizations
Address the gap between local organizations and their expert local knowledge and elite institutions with their greater resources but less knowledge of what communities want and need.

6. Create system(s) to dispatch volunteers across the city
The report flags the strain of finding, dispatching and managing volunteers as a major challenge for the CBOs: “While some communities were flooded with help, others did not have enough.” Various systems were used to deal with the problem from the sloppy but immediate use of Twitter to the database-driven CiviCRM system used by Occupy Sandy to coordinate tens of thousands of individual volunteers, the largest effort in the City.

7. Develop and regularly test emergency plans
Many groups and residents are frustrated by the readily apparent under-use of disaster management plans developed before disaster. While there are reasons for this under-use (see “The Fantasy of Disaster Response Documents“), the report calls on government to determine if such plans are relevant or feasible.

2. Strengthen community responders, including institutions and leaders
Here, the emphasis is on climate-related planning during calm and developing CBOs capacity and resources during disaster events.

3. Provide grants, loans and credit to individual disaster victims and small businesses
This reccomendation is mainly for philanthropists, many of whim requested that CBOs act as go-betweens for micro-loans and grants. The report requests that they same thing occur, but without CBOs as in intermediary, which often caused strain for such groups already overwhelmed with providing other forms of aid.

4. Monitor rebuild spending and priorities
This is a major issue after Sandy, and is laid out in the Alliance for a Just Rebuilding report “How Sandy Rebuilding Can Reduce Inequity in New York City.”

5. Strengthen sustainability in a new climate
The report calls for concrete plans for physical and social structures that both mitigate and adaptat to climate change.

Other Reports on the Community/Activist Response to Sandy:

Solnit, Rebecca. A paradise built in hell: The extraordinary communities that arise in disaster. Penguin, 2010.

Alliance for a Just Rebuilding, “Turning the Tide: How our Next Mayor Should Tackle Sandy Rebuilding.” July 2013.

North Star Fund, “From the Edge of Disaster: How Activists and Insiders Can Use the Lessons of Hurricane Sandy to Make the City Safer,” April 2014.